I can’t believe we have being doing this for 5 years now. On December 1 the fifth annual ‘We Are Machine Pop’ compilation will be released. This year the following artists contribute: Sector One, Kretz, DATAPOP, Neon, Plast, Zeitmodelle, Marboss, Kevin Lux, Maschine Brennt, Niels Gordon and Conny Olivetti. Oh, and of course Unisonlab as well. Visit Bandcamp to buy!

These are the good guys. They always obey orders and they always support my ideas. They are always in sync and they love making a lot of weird sound.

The bad guys, on the other hand, are ‘the Lack of Time’, ‘the Need for Sleep’ and worst of all ‘the Risk of Just Fooling Around’.

It’s done. I started out with a couple of Moog Mother-32s last year to see if modular synthesis was something for me. And guess what? It sure was. A couple of months ago a guy was selling a complete, medium-sized Doepfer-based system with a few twists. So I sold some of my seldom-used gear, bought the stuff, added an Abstract Data Octocontroller (for unlimited triggering and randomness) and put it all together. And oh, is it rewarding!

Presently I’m just experimenting and recording snippets and one-shot percussion sounds for my next project but it feels like the modular synthesized beats will feature more and more in Unisonlab tracks.

Finally! Time to put the release party hat on!

It’s been a year since my latest release. Back then, me and a couple of Plonk fellows did some remixes of ‘Electro Life’. That was the first time ever someone else went berserk on a track of mine. And I assure you – that feeling when you first get to hear the results is nothing but heartwarming and downright super-exciting! Many thanks to Sector One and Maschine Brennt! Awesome work!

It’s all about labor of love. On 29APR, I will release ‘Interaktion’, an EP containing four tracks. They are all (sort of!) on an ‘interaction’ theme, although I wouldn’t say it’s some sort of concept album. (Of course it isn’t since it’s an EP!). I have just directed my thoughts towards the many ways people interact.

For instance, the track ‘Elements’ is about a future where we actually use technology in a way that allows us to live in a world without greed, hunger, jealousy or gluttony. The ‘robots’ mentioned are supposed to be a metaphor for doing meaningful things with the time we have.

Surely I hope for a few online sales but feel free to check out the ‘Elements’ video for free! For those who fancy it, the EP will be available on all major (digital) online stores on the beforementioned date.

The elements – humans, robots and machines.

By the way, why spell ‘Interaktion’ with a ‘k’? Because this time I felt even more expressive using the German language on a couple of tracks. And I guess you all know about my faiblesse for that Düsseldorf quartet…

Now, time to get working on the next project. I am happy to say, this time it won’t take a year!

I love this thing. Nota bene, I don’t own one yet but as soon as I’ve let a few other things go, I’ll surely get one. I mean, four LFOs, able to act as VCOs, modulating each other… Madness! There are some cool clips available on YT.

Doepfer A-143-4. Impossible to tune but apparently badass sounding.

I think it would fit just fine in Unisonlab. Unfortunately, it wouldn’t fit in the 5mm rackspace that I got left.

Time to get back to the modular age. I own and use a couple of analog – and even vintage – synthesizers but I’ve never taken the step into modular. Perhaps a bit unorthodox, I chose to start with a semimodular foundation in the shape of three Moog Mother-32s. At this stage, I just added a small ‘utility’ case with multiples, a clock divider, a clock multiplier, a mixer and a couple of other useful modules. The main reason for this was to be able to sync Volcas, the Juno-60 and the SQ-1 driving the MS-20. For now, I use a Doepfer Dark Time as the main clock.

Last year, PLONK released their first compilation. Since then, all of the artists have released stuff of their own – and great songs they are indeed – but now it’s time for the next compilation. WaMP2 will again showcase the ultracool genre that is Machine Pop. Official release date TBD, so stay tuned…

But I will tell you though – it sounds great!

The PLONK semi-label, as well as our Machine Pop genre, is really creating a buzz. And Unisonlab gets more and more plays on different stations. For example, check out https://soundcloud.com/lloyd-da-zoid/ea-30-05-15-gfr for my ‘Rhytmus’ remix for DATAPOP.

I’ve just finished a remix for Kretz, who is one of the big brains behind the PLONK collaboration. Actually, he met Rusty Egan in London the other night – we are all eager to hear what that might lead to.

If all goes well, I will release a remix album of my own on June 26 so stay tuned!

I have noted a growing interest in the unisonlab blog. Therefore I will start translating most of its contents to English. FYI.

I just love it! Although I have neither owned nor played a Formanta Polivoks, I guess I should be p-r-e-t-t-y happy just to have a Red Rock Sound ‘Ivoks Electromusical Synthesizer’ in the Reason rack. I recently finished a cover on an 80s Swedish synthpop track that needed that edgy, slightly detuned sound and I ended up using just a bunch of Ivokses. Spicy!

…is this website about? Well, it’s basically just about my deep friendship with music and gear.  I am a member of PLONK and I produce Machine Pop. But mostly ‘Unisonlab’ is just a place where I rule over both chaos and control… 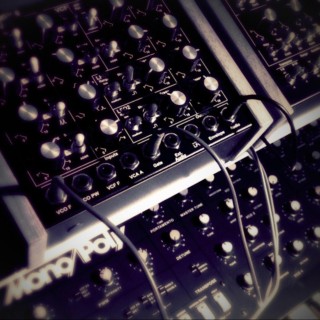 I manage a small but exciting project studio called unisonlabsounds. When it comes to own composition, I produce electro inspired tracks by the name of unisonlab.

Thoughts on growing up and growing old in the digital age

Life of Olle (not Brian)

"Always look on the bright side of life"